Ferrari Ride & Breakfast Auction at Wine & Wishes Event
The Ferrari Owners Charitable Foundation kicked off its year of charitable giving by once again donating multiple opportunities for bidding on the popular “Ferrari Ride & Breakfast” auction item to the 2015 Make-A-Wish “Wine & Wishes” event. Winners enjoyed a ride as a passenger in a Ferrari driven by a member of the Ferrari Owners Group (FOG) on one of the bi-weekly FOG breakfast drives. Each experience included the opportunity to ride in a Ferrari on some of Northern California’s most stunning backroads followed by a sumptuous breakfast with a group of Ferrari owners. All of the proceeds generated by the Ferrari Ride & Breakfast experiences were donated directly to Make-A-Wish Greater Bay Area.

FOG Rally 2015
Building on the success of the 2014 FOG Rally, this year’s event launched fifty Ferraris on their way from Mill Valley to Lake Tahoe where participants stayed at the elegant Ritz-Carlton Lake Tahoe Hotel. Under the continued presenting sponsorship of Ferrari Silicon Valley, Rally participants enjoyed a breathtaking drive, dined under the stars, and enjoyed the camaraderie of fellow Ferrari aficionados throughout the weekend. The event included a Gala and Auction hosted by the Hilton San Francisco Financial District, which netted $275,000, enabling the Ferrari Owners Charitable Foundation to surpass its 2014 record-setting gift to Make-A-Wish Greater Bay Area.

Wish Reveal for Tre Grinner
In the Spring of 2014, FOG members were invited by our new beneficiary partner, Make-A-Wish Greater Bay Area, to participate in a “Wish Reveal,” a special time when a child learns that his or her wish will be granted. The entire Board of Directors of the Ferrari Owners Charitable Foundation joined two Make-A-Wish representatives and secretly descended upon the home of 17-year old Terry “Tre” Grinner, diagnosed with Hodgkin’s Lymphoma, whose wish to be an investment banker for a day was about to be revealed. Only Tre’s mother knew that the Board members were quietly setting up a small car show for Tre outside the family’s home. Passionate about Italian sportscars, Tre was invited outdoors where he discovered a dozen Ferraris in his front yard! Tre was then invited by FOG founder, Joe Keon, to get behind the wheel of his Ferrari and give it a spin.

The Ferrari Owners Charitable Foundation has published four editions of Cavallo da Corsa, a lifestyle magazine that showcases the charity supported each year, provides a detailed pictorial of the Foundation’s signature event, the FOG Rally, and includes articles on contemporary trends in fashion and culture. The magazine was produced locally by long time Rally sponsor, Essence Printing.
FOG Rally 2014

Ferrari Ride & Breakfast Auction at Wine & Wishes Event
The Ferrari Owners Charitable Foundation donated multiple opportunities for bidding on “Ferrari Ride & Breakfast” to the 2014 Make-A-Wish “Wine & Wishes” event. These popular auction items were bid up competitively and each winner was treated to a ride as a passenger on one of the bi-weekly FOG breakfast drives, experiencing the unique opportunity to ride in a Ferrari on some of Northern California’s most stunning backroads followed by enjoying breakfast with a group of Ferrari owners. All of the proceeds generated by the Ferrari Ride & Breakfast experiences were donated directly to Make-A-Wish Greater Bay Area. 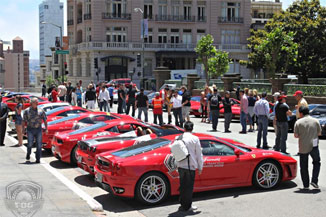 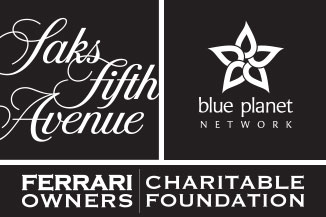 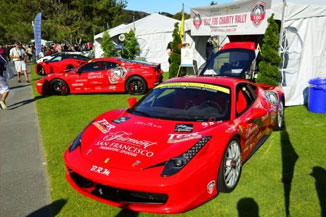 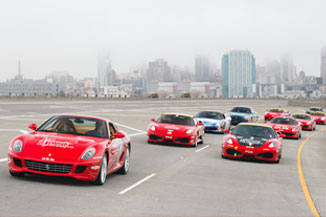 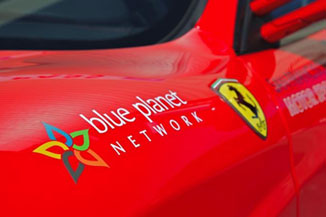 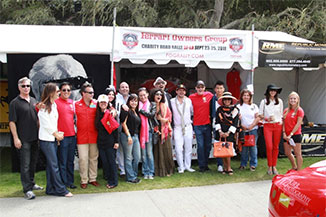 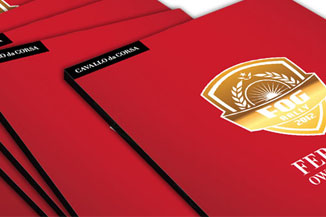 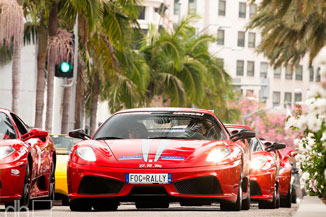 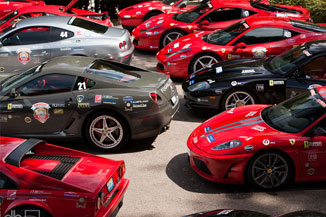